Penn students returned from fall break this Monday to a glaring reminder of the prevalence of radical views within college campuses.

Penn Students for Justice in Palestine erected flags as a memorial to the 71 Israeli lives and 2,251 Palestinian lives lost during Operation Protective Edge in 2014. Along with the flags, the group hung a sign explaining the memorial and cited their numbers from a United Nations report. While the memorial may seem balanced and peaceful, the presentation is misleading and reprehensible.

The 2,251 number, which the student group has used in their memorial, includes all lives lost in operation Protective edge, including terrorists. Even by the most anti-Israel standards, experts agree that this number includes members of Hamas killed in the bombing and invasion. The exact percentage of the 2,251 killed who were civilians varies depending on the source, but it is undeniable that terrorists are included in this number.

Interestingly, the same United Nations report cited by the student group claims that 1,523 killed were civilians.

Furthermore, in a post to their Facebook page, Penn Students for Justice in Palestine even admitted that no more than 70% of these casualties are civilian. 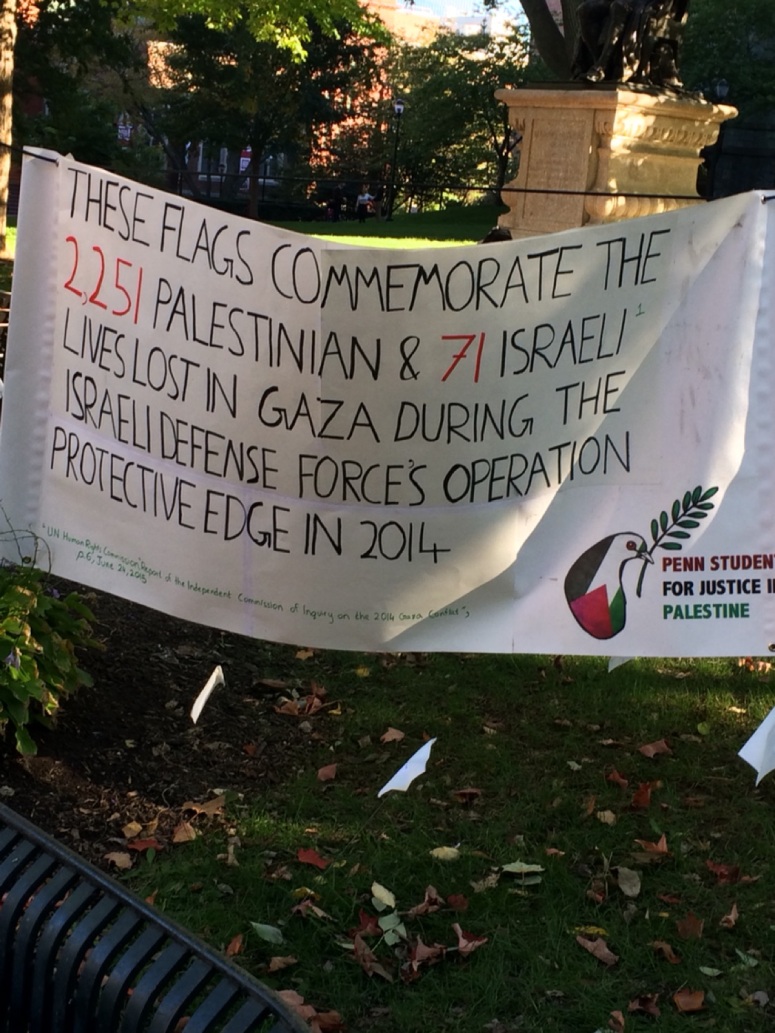 This evidence begs a question: Why is a student group memorializing the lives of terrorists? We do not memorialize the life of Nazis in Holocaust museums or the 9/11 hijackers in our memorials.

Of course there is always a place to mourn the tragic loss of civilian life in the conflict, but the Students for Justice in Palestine have erected a memorial partially dedicated to mourning the lives of terrorists.

In an effort to appear fair, the presentation does include Israeli soldiers who were killed. This was done deliberately, in order to create a false moral equivalency between the Israeli military and Hamas. Hamas, a terrorist organization, uses human shields and consistently targets civilians indiscriminately. They have called for the death of world Jewry and have dedicated their lives to carrying out that mission. While criticisms of the Israeli military and government are certainly legitimate, it is unfair and offensive to put Israeli soldiers and Hamas terrorists in the same category.

So in the year 2016, on a “tolerant” college campus, a group openly memorializes anti-Semites. They openly defend some of the most hateful and violent people in the world, and they openly mourn the lives of those who deserve no respect.