As Penn students grapple with the aftermath of revelations surrounding University of Pennsylvania President Amy Gutmann, the rest of America finds itself divided on another issue entirely: the Federal Communications Commission’s repeal of Obama-era “net neutrality” Internet regulations.

This Thursday afternoon, the FCC voted 3-2 to undo the 2015 rules that reclassified Internet access as a telecommunications service subject to Title II of the 1934 Communications Act. The rules had effectively prevented Internet Service Providers from price discriminating on the basis of user, website, and platform.

Throughout its short lifetime, net neutrality maintained fanatic support from consumer advocacy groups, media outlets, and activists. In the weeks leading up to the repeal, battleforthenet.com warned readers that, “The FCC is trying to kill the Internet again.” The New York Times published an opinion piece probing the apocalyptic possibility of a “future without net neutrality.” And if you visited Facebook, Reddit, or Twitter in the last month, it’s very likely you’ve seen this eye-catching propaganda poster: 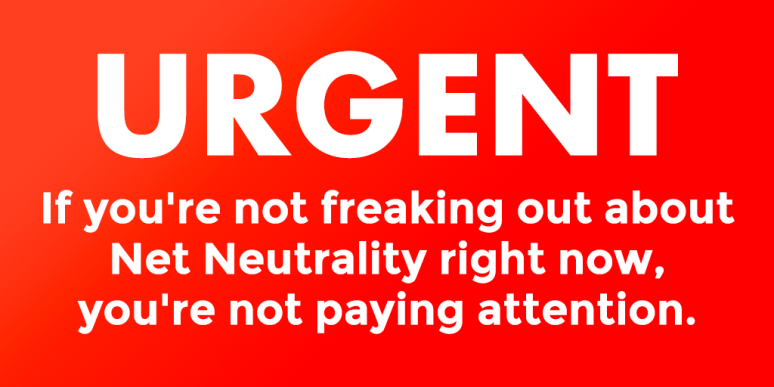 With all this talk of battles, killing, “freaking out,” and uncertain futures, it’s easy to lose sight of what’s really happening with the net neutrality repeal.

The FCC is restoring power to the free market by paving the way for competition in the industry.

To start, let’s dispel the notion that deregulation will lead all large ISPs to favor some websites over others. As Ian Tuttle observed in his National Review article, the FCC “could cite just four examples of anticompetitive behavior, all relatively minor” when the agency first initiated its push for ISP regulation. Net neutrality was solving a problem that didn’t exist. It didn’t exist because, in a free market, an unsatisfied consumer could simply switch from an ISP that throttled connection speeds against his favorite website to an ISP that did not alter data streams. Ultimately, it’s in the best interests of most big ISPs to not favor some websites over others. Comcast showed as much when they tweeted a commitment to their customers this past November: “We do not and will not block, throttle, or discriminate against lawful content. We will continue to make sure that our policies are clear and transparent for consumers, and we will not change our commitment to these principles.”

But if net neutrality is pointless, then why did the FCC back it so fervently?

Because the regulations favor those with power.

The cost of this power came in the form of damage to small ISPs as well as to businesses in general. As Hal J. Singer, principal for Economists Incorporated, observed in an op-ed for the Brookings Institute, “businesses need ISPs to continue investing in their broadband networks.” Innovation in broadband helps technology-reliant businesses across the board, but net neutrality damaged the investment that leads to such innovation. As the Daily Wire reported, one study “estimated net neutrality regulations could result in as much as $45.4 billion in new investments being lost over the next five years.” Smaller ISPs simply can’t bear the burden of such regulations.

After all is said and done, the repeal of net neutrality will simply revert things to the way they were before 2015—no pay-to-access websites, no catastrophic collapse of a free Internet. Just the removal of onerous agency regulations and the restoration of economic freedom in an industry lacking air for small businesses to breathe.